Le Mirage Desert Lodge & Spa has received a TripAdvisor® Certificate of Excellence award. The accolade, which honours hospitality excellence, is given only to establishments that consistently achieve outstanding traveller reviews on TripAdvisor, and is extended to qualifying businesses worldwide. Only the top-performing 10 per cent of businesses listed on TripAdvisor receive this prestigious award.

To qualify for a Certificate of Excellence, businesses must maintain an overall rating of four or higher, out of a possible five, as reviewed by travellers on TripAdvisor, and must have been listed on TripAdvisor for at least 12 months. Additional criteria include the volume of reviews received within the last 12 months. 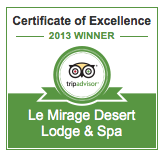 Le Mirage Resort & Spa is one of the most unique establishments in the Sossusvlei area. The lodge is situated at 21 km from the Sesriem gate to Sossusvlei. This makes it one of the lodges closest to the Sossusvlei and the ideal place to stay when you want to visit the highest dunes in the world!